The exhibits in the permanent collection have now all been catalogued and they consist of items rescued from the pre-war collection, photographs and documents from the City Archives, and donations made by Jews who came from Worms. As a result, almost all of them have a connection to the city.

As well as a model of the old synagogue in Worms (a building dating from around 1600), there are medieval records, plans and documents on display. Ritual and everyday objects offer insights into religious rituals and the most important Jewish festivals during the year.

Tribute is also paid, of course, to Rashi, the most important scholar at the Jewish school (yeshiva) in Worms (around 1060), after whom the museum building is named.

Reports from the lives of individuals and documents give information on the violent end to a centuries-old community and tradition that was brought about by the deportation of the last Jews in Worms during the tyranny of Nazi rule. Our media station rounds off this part of the permanent collection with some very moving interviews with Holocaust survivors, film footage on Jewish Worms (in various languages) and other digital material.

The exhibition space of the Jewish Museum on the ground floor of the Rashi House is devoted to the history of the Jewish community in Worms from its beginnings more than a thousand years ago up to the end of the period of Nazi rule. Here, you can also find out more about the Jewish cemeteries in Worms, including the ancient Holy Sands (in German Heiliger Sand).

Medieval records, plans and other items, including stone spolia and archaeological exhibits, give an insight into life in the Jewish quarter, whose architectural structure has largely remained intact, and into the rich and long history of the flourishing Jewish community in Worms and its close connections with the imperial and episcopal City of Worms itself.

The end of this Jewish community in Worms was marked by the destruction of the old synagogue in 1938 and the deportation of the last Jews in 1942 under Nazi rule. The museum documents this development with reference to individuals and by means of written documents, objects and photographs.

The most important festivals

The models and the ritual and everyday objects in the medieval cellar vaults offer you insights into the spiritual world, rituals and traditions of Jewish families. You can learn, for example, how the most important festivals are celebrated, such as the Jewish New Year (Rosh Hashanah), the Day of Atonement (Yom Kippur), the Feast of Tabernacles (Succot), the Festival of Lights (Hanukkah) and the weekly Sabbath, and also the significance of the menorah (a candelabrum with seven branches and an important Jewish symbol), of silver tableware and of the Scroll of Esther.

What procedures must be followed during the circumcision of a new-born boy? How is a Jewish wedding celebrated? What equipment does a Jewish male need for morning prayer? What is the correct way to wear a kippah (a skullcap worn by men), and why do practising Jews fix a mezuzah (a parchment inscribed with biblical texts and kept inside a case) to the doorframe of their home? What does a rabbi do and why is it important for people of the Jewish faith to know about and follow the Torah (the Hebrew Bible)? You can learn about all this and more in our museum.

Rashi and the synagogue

You can learn more about the history of the synagogue, and a model shows you what it looked like around 1600. Tribute is also paid to the most important scholar at the Jewish school (yeshiva) in Worms. He studied here around 1060, later became Rabbi Salomon ben Isaak of Troyes in France, and is known as Rashi.

A digital media station on the ground floor with a large flat screen monitor presents fascinating eye-witness accounts and shows introductory films on the museum and the Jewish history of Worms (in German, English and French). A selection of additional digital material is also available.

More on the media station

Our media station rounds off this part of the permanent collection and brings alive the Jewish past. On a large flat screen monitor you can watch very moving interviews with Holocaust survivors and introductory films on the museum and the Jewish history of Worms (in German, English and French). A selection of additional digital material is also available. 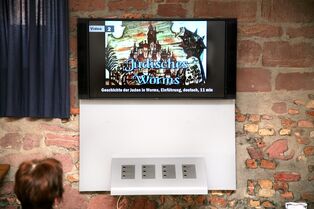 Reports by Holocaust survivors from Worms:

Visitors can watch five approximately ten-minute sequences from eye-witness video interviews with Holocaust survivors from Worms. The City Archives were able to purchase these interviews in 2012 from the collection held by the Shoah Foundation in California/USA.

The interviews were filmed in the 1990s and give gripping accounts of what the young people experienced before their enforced expulsion from Worms. These reports were edited and provided with German subtitles by the media scientist and art historian Ralf Kotschka (from the agency in Trier “visual concepts” with its specialization on media for museums), who undertook all the technical work and programming and prepared the media station for the City of Worms.

Visitors can watch the following eye-witness video interviews with Holocaust survivors from Worms:

Following the ransacking of their home, the family moved to Mannheim at the beginning of December 1938 to live with Ingeburg’s maternal grandparents. In 1940, Hugo Mann managed to emigrate to the USA with his wife Mathilde and their daughter Inge(burg). Inge Davidson lives in Los Angeles and has two daughters.

In March 1939, the married couple Julius and Ida Fröhlich emigrated to Syracuse/USA with their sons Walter and Fritz. Walter worked as a science journalist in Washington and Fritz Fröhlich became a professor.

Elsbeth left Worms for good soon after “Crystal Night” in November 1938, and managed to emigrate to the USA in December 1938, not yet 18 years old. She went to Allentown/Pennsylvania, where she married. Her parents and all her other relatives became victims of Nazi tyranny in 1942.

Following the ransacking of their home and the death of her husband Hermann as a result of imprisonment in a concentration camp after the pogrom in November 1938, Frank’s mother Jenny Gusdorf moved to the centre of Worms with her two children Frank and Ruth and set about organizing their emigration. Frank was taken to London on 9th June 1939 as part of the Refugee Children Movement. His mother and her daughter Ruth left Worms on 11th November 1939 and emigrated to the USA. Frank became an engineer and has three children and several grandchildren. He lives in Santa Clara in California with his family. His sister Ruth died of cancer in 1985.

Following the terror of the pogrom in 1938, during which seven-year-old Suse suffered severe shock and had to be looked after by relatives in Frankfurt, she was taken to England in July 1939 as part of the Refugee Children Movement. A Christian family took her in and raised her as if she were their child. Her parents Albert and Flora Herz left Worms in January 1939 and went to live in Duisburg. From here they were deported together with Suse’s sister Edith to the concentration camp in Theresienstadt, where Suse’s father Albert died in 1942. Her mother and sister Edith survived the concentration camps in Auschwitz and Stutthof (near Danzig). With the help of English soldiers, they re-established contact with Suse, and in 1947 the three of them emigrated to the USA together. Suse married in 1951, has three children and lives in New Jersey.